I love my sweet apples.

Apples with skin on or naked? The results of this poll will determine how I eat apples for the rest of my days. That is, if I can get more than 10 apple lovers to respond to this post.

The reason I’m asking is because recently my son who is 5 has asked to have his apple a la natural. I know the facts about apple skins and how many nutrients are crammed into its natural packaging. My concern is what I can’t see and what I can feel. Apples are naturally coated in a wax to make them shiny and appealing to the eye. Goodness only knows what attaches itself to the wax or what was already on the apple before it was coated.

It would be safe to assume that everyone has heard the saying, ‘an apple a day keeps the doctor away,’ since it has been around for nearly 150 years. As a side note I was interested to learn from phrases.org that the original version was, ‘eat an apple on going to bed, and you’ll keep the doctor from earning his bread,’ which was a Pembrokeshire proverb. I think I can safely assume that eating an apple, skin or not, is better than not eating the apple at all.

The apple skin debate raged for about 5 minutes in our home. Personally I’m of the opinion that Master 5 has alterior motives (when did he learn manipulation skills?). Wobbly teeth season hit our place at about the same time as the request for skin left on. I think he’s looking at having the ledger in his favour with the tooth fairy. Not exactly a get-rich-quick-scheme but one way or another he’ll get to eat his apple. Lucky he’s not William Tell’s son otherwise that apple would have an arrow smack-bang through the middle of it.

So whether you and your kids prefer their Granny to their Pink Lady, be a sweetie and weigh in on the debate below.

I love you every day! How do ya like dem apples? 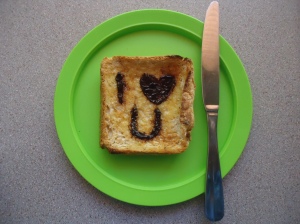 I love breakfast time with the boys.

Weekday breakfasts are a flurry of toast, milk, cereal, butter and spreads.

Our house rules state that breakfast will be eaten at the table. At least that way the mess is confined to a small space-most of the time. I should be grateful that they are still but that’s the only benefit of breaking the fast in the one location.

Dependant on the food choices of Master 5 and 2, by the time we’re finished this morning ritual there is a combination of debris that need to be removed.

Master 2 likes to sit like a ‘big boy’ with no booster seat on the dining room chair and no bib to boot. His lap becomes a crumb collection point until he gets himself down, at which point he leaves a trail any pigeon would be happy to follow. Master 5 is pretty good. He can now manage to keep his cast-off to a mere 1 metre radius. While all of this is happening I move around the house with my mobile feeding device (bowl and spoon). On a good day I can chew while I do my hair (brush it), get dressed (throw on clothes one-handed) and put away the dishes from the drainer (which have sat there overnight drying).

Upon finishing clean dishes duty it’s time to put more on the dirty side again. Poor sink! It never gets a breather. Discard crusts from toast, try and wash uneaten soggy cornflakes down the sink and rinse milk cups. Move to table, wipe up spilt milk and crumbs, wipe chairs where jam-covered sticky fingers have been and clean floor. Go back to kitchen, put away spreads and wipe down bench in readiness for lunch time. And breathe.

If you’re one of those people who sits with their children at the table to consume your morning menu with your hair all pretty and stain-free clothes on, please share your secret. If there’s a way to achieve this I’m sure I missed that chapter in the parenting manual.

There’s happy tummies leaving the house this morning so I guess that’s all that really matters.

I’ll look forward to the weekend when I can sit with the kids and taste my breaky.

I love my Vegemite kids!

I love you on vegie night.

Vegetables served up at dinner time occurs 5-6 times a week in our house. It might consist of meat and three veg right there for all to see. The second option is salad veg also naked and identifiable. Finally there’s the hidden alternative. It’s on a stealth mission to get into the mouths of babes undetected.

Vegetable consumption was a whole lot easier when my two were spoon fed. Now it’s a battle royale to get anything into their mouths that may be related to vegetables.

Then there’s the exception to the rule. ‘Oh, are you sure you want TOMATO sauce with that? You know what it’s made out of, don’t you?’ Tomato sauce is not a condiment in our house. It’s almost a food group in itself.

As my eldest finds himself in new situations he is also exposed to a wider range of foods. He recently asked to take carrot sticks to school. He’d tried them at after school care and seen other children taking them for morning break. You’ll eat them there but not here, I think to myself. ‘Yes, Roger Rabbit, you may take carrot sticks,’ I say after my gaping mouth is able to form words again.

My palate has changed as I’m sure the kids will as they get older. From memory there were only 3 vegetables that used to pass through my lips as a child. One of them was peas and they didn’t even make it to the swallow stage. I’d leave them till the end, stuff them all in my mouth and try not to chew. A mumbled, ‘can I please leave the table?’ later and I’d make a hasty retreat to somewhere private where the peas could be unceremoniously dumped much to my tongue’s delight.

I’ll give my eldest credit where credit’s due. He has recently added to his repertoire and now tries things that he can identify. His list of acceptable vegetables now includes: potato, carrots, broccoli, corn on the cob, lettuce, tomato and peas (swallowed). He’s tried some others but they haven’t made the list yet.

Until such time that we have an array of vegetable matter being digested I’ll continue with my covert tactics. Sausage rolls and spaghetti sauce are two of my favourites things to make where vegetables go undercover. I’d appreciate any other ‘vegetables in disguise’ recipes/ideas you have if you’d care to contribute.

They can continue their love/hate relationship with vegies but I’ll still love them just the same.

It’s pasta night at our place. For us it usually occurs sometime midweek or when it’s been really hot and my enthusiasm for ‘cooking’ is at a low point.

A big batch of home-made pasta sauce which has been made, lovingly, by hubby prior to tonight and frozen into batches comes in really handy. Boil the water, add the pasta, defrost the sauce, whack some garlic bread in the oven and, voilà, dinner is served.

The eating part is pretty easy and fun to watch the kids do too. There’s never normally any complaints at the dinner table on pasta night. There’s lots of slurping, not much talking and Dolmio Grins all round at the end.

If only the clean-up were as easy or fun. Bits of slurped sauce seem to stretch for miles. There’s stringy bits of pasta everywhere that have started to congeal. If you miss one during the clean up and find it x days later it’s set like concrete. Crumbs from the garlic bread are all over the seats. And, please, let’s not even discuss dirty hands. The hands have been used in place of a fork to get those last ends of pasta into the mouth when they can’t slurp it in any further. If one of the kids manages to escape the table without having been wiped down first I’ll find those pasta prints on the sides of the chairs from when they’ve climbed down. That’s before the table and kitchen even get a look in.

So there’s a price to pay for my slack cooking. The clean-up is a drag. I do love watching the kids suck that fettuccine on pasta night. It makes it worth the lack of effort. Feel free to share your throw together meals that your kids love.