Imagine if you could, just for a moment, the kind of parent you imagined you’d be, merging perfectly with the parent you’ve become. Do I hear guffaws of laughter from those of you who think that’s hilarious?

Through my 20’s, which was also the beginning of my teaching career, I thought I had a good handle on the concept of parenting.

On my very first day, I had a class of 5 year olds who came in with saucer-like eyes. They stole glances at me; this newbie who hadn’t a clue what was about to occur. Just as a predator can smell fear, I am certain that they could sense mine.

As the bell rang, most of the children made their way to the floor as a mother entered with her son. She seemed flustered as the boy eyed me from his latched position on her leg. She said she was going to be late for an appointment and needed to leave. Being fresh as a spring daisy, I tried to utilise my limited arsenal to encourage him to join his classmates on the mat.

Holding out my hand, he clung even tighter while his mum detached him and thrust his arm out to me. With his tiny wrist surrounded by my hand, he kicked at my shins and screamed blasphemous words that would put a drunken sailor to shame. The mum had turned on her heel already and I wasn’t far behind. I closed that door behind me with trembling hands and tears of failure streamed down my face as I made my way down the corridor to the principal’s office.

Thousands of children, all with different personalities, quirks and backgrounds have since crossed the threshold into the classrooms in various schools where I have practised my craft. Now, I also have children of my own.

All of these children came through doorways paid for by the government. Some of these entrances were in need of a new coat of paint, some doors were bearers of scars from fists, chair legs and other implements randomly thrown. Others displayed pride, colourfully decorated with art work, welcoming anyone who would step through. Perhaps the posters and drawings just covered up any harm that had been done to the surface.

I, too, bear the scars. There are physical ones you can see. Scratches on my hands, my skin dug at so deeply that as I age they become whiter; a constant reminder of my journey. There are emotional ones etched on my heart that only I can feel. True stories of children who awoke each school morning top-to-toe with their brother in the back seat of the family car. Tummies rumbling at a quarter to nine was as common as the unwashed uniforms and tousled hair. Children who had lost a parent through accident, illness or an horrendous tragedy. The communities that grieved for a student lost, much too young to be with us no more.

Ten years of teaching, before my first son was conceived, and these children helped me to learn more than I probably taught them.

Cookies for the school fair? I’m your mum! Car broken down? This chick will give you a lift! Need to talk? Your gal pal will be there.

Now I’m no Mother Teresa. I haven’t dedicated my life to the service of my community and others who are less fortunate than myself but I do everything in my power. There are many instances in which one may find themselves and think, ‘Yeah, someone else will do that,’ or ‘I can’t be bothered/don’t have the time.’

I’m not one of those people. I’m a helper. A perpetual helper: forsaking all others including myself. Sometimes to the detriment of myself and/or my family. 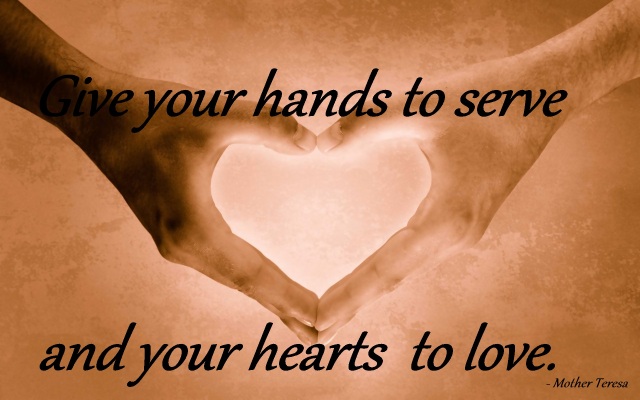 I can do everything. Really I can!

Scene: Brighton beach, Adelaide (Australia) 10:30pm. We’ve seen in the New Year (albeit a little prematurely) with our closest friends and all our combined kids at a fireworks display they put on annually for the public. There’s families, oldies and an assortment of local youngsters (gee I sound old) swigging from bottles behind the backs of the local law enforcement.

I’d smiled at the sight of a couple earlier in the evening who were probably in their late 50’s. My mind wandered to that point in my life where I’d be sitting there sipping champagne in my togs while littlies whizzed by with sparklers, squealing, others building sandcastles. I’d have my husband by my side and I’d be wondering if my boys were ok because they certainly wouldn’t be hangin’ with Ma and Pa by then. We’d be well past our use-by-date in the cool, hip and happenin’ department by then. Perhaps we might be useful to do the 3 a.m pick up. We’d chink glasses, as this couple had, and drink in the New Year together with a heart full of love.

While my brain enjoyed the imagery, my sights were firmly on the kids. We almost needed a leash for Just 3 who was still two then. Keeping him within reach near the water’s edge while Halfway to 6 ran off to talk with boys from school took most of my focus.

The fireworks display finished for yet another year. We began to pack up when I noticed the lady from the couple I’d been in awe of earlier. She was curled on the sand with her partner nowhere in sight. Their chairs were still on the sand and the table still bore the remnants of their meal and drinks. Maybe her partner had gone to the toilet? Possibly to get the car if it was parked some distance away? Had she had too much to drink to walk without his assistance? I instantly brushed all thoughts aside as we ensured we had everything and everyone. Rubbish was deposited into a bag. Wet towels were dumped in with rashies and heads were counted.

Did the lady just twitch? Yes, there she goes again. I asked my favourite person in the world, Belinda, if she saw it. We watched together as the men were left with the charges.

‘Is she having a seizure, you think?’

Without another thought I headed over to the lady curled on the sand. Placing my hand on her shoulder I asked if she needed any help. She was quite incoherent to begin with and the smell of alcohol drifted past my nose. Belinda was opposite me and together we tried to coax her to sit up. As she began to speak with more clarity we began to understand why she had chosen the cool sand as a place of respite in a crowd of many. The alcohol had loosened her tongue and although it made her difficult to understand, the stories and events she spoke of were beginning to link together to form a picture. A series of abusive events, the past marriage breakdown, the son who had taken his own life recently and the ever-present fear for her own safety. Officially now I am out of my depth but I cannot leave this lady in this state. What kind of person would I be to walk away? Reassure her everything was going to be alright and leave her to it? Clearly everything was not okay and I don’t do nothing when I can do something.

We asked her name and if she had her phone with her. Was there someone we could call? Someone with whom she was close and who lived close by?

Jan was her name and, no, there was no one else except the man who had left her there.

My main concern at this stage was not to leave her on her own. Belinda tried calling her partner that had left her there to find her own way home. This was to no avail so we listened, cared and managed to get her sitting up. She spewed forth details of the culmination of events from her life that had led her to the here and now: alone on the shore with no one to care for her except two strangers. Her skin felt cold where my hand was resting on her back so I offered her my jacket. The ‘thank you’s’ started as she began to sober and she was able to stand. For some reason she found linking arms with me gave her to courage to continue. Either that or I was just something to hold onto: both emotionally and physically.

Jan was attached to me so Belinda went off in search of back up. While Belinda was gone Jan shared scars and open wounds: tales from the life that she had led. I did nothing but listen and acknowledge with an understanding nod when appropriate. But really, what did I know? I only know that the human spirit of compassion is alive and well in me.

Three police officers strolled across the sand with Belinda leading the way and we were finally able to make progress, both for Jan and our journey home. My arm was still entwined with Jan’s and there was no sign I’d not be required for some time. Belinda’s arm had been given duty on the other arm and as well all stood arm in arm we presented a united force. Jan needed strength in numbers and she needed people on her side that night.

The partner (whose name I don’t remember or chose to forget) eventually arrived and attempted to have the police believe she was making it all up. Whether she was or not was not for me to decide. I do know what I believe though.

So with jacket in hand, a hug from a near-perfect stranger and many gracious words, my friends, my family and our kids made the slow loaded-down trip back to the car.

Belinda and I had done what we could do.

In hindsight I wondered about how many people saw that lady curled up on the sand. Did they notice and shrug it off? Did they not want to involve themselves? Do people just not care like I seem to?

I can’t do everything and I’m just starting to acknowledge that.

I can only do what I can do and that’s what I’ll continue to do until I can do no more.

I can do something because, really, what’s the alternative?

My children will know what it means to lend a helping hand.